Throughout the ages, Lord Vishnu, has incarnated in various life forms through different yugas (ages) in situations where Dharma (truth) was in danger because of certain evil elements in the world. There are ten documented instances of incarnation of Lord Vishnu. These incarnations are termed as the avatars of Lord Vishnu.

Whenever Dharma, or the situation of law and order, is endangered on this world, I incarnate onto this world to re establish Dharma, law and order, and to protect the Sadhus or saints and to detroy the evil elements of the society. Here are the avatars of Lord Vishnu with apporpriate deatils of the situation under which the lord was compelled to land on the earth. 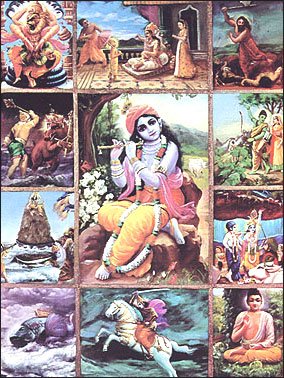 Matsya - The Fish - This appeared in the Satya Yuga. King Manu was washing his hands in a river when a little fish swam into his hands and begged him to save it. He put it in a jar, which it soon outgrew; he successively moved it to a tank, a river and then the ocean. The fish then warned him that a Great Flood would occur in a week that would destroy all life. Manu therefore built a boat which the fish towed to a mountaintop when the flood came, and thus he survived along with some "seeds of life" to re-establish life on earth.


Kurma - The Tortoise - Kurma was the second avatar of Vishnu. The Devas (Gods) feared that the Asuras (Demons/Evil) would take over the whole world. Therefore, they prayed, and the Hindu Trinity suggested a solution: churn the Ocean of Milk in order to obtain the Nectar of Immortality. However, the Devas could not churn the Ocean themselves. They struck a temporary truce with their enemies so that all could participate in the churning. The Ocean was churned by using the mountain Mandara and the snake Vasuki wrapped around it. Each side would hold an end of the snake and pull on it alternately, causing the mountain to rotate, which in turn would cause the Ocean to be churned. However, once the mountain was put on the Ocean, it began to sink. Then, Vishnu incarnated in the form of a turtle to support the mountain. As the ocean was churned, a deadly poison known as Halahalal emerged. This poison threatened to suffocate all living things. In response to various prayers, Shiva drank the poison and held it in his throat. This caused the throat to turn blue. Various people, animals, and treasures emerged.

Along with these-Dhanavantri, the Heavenly Physician, emerged with a pot containing nectar. As the Asuras rushed to take the nectar, the frightened Devas appealed to Kurma, who then turned himself into a maiden named Mohini. The damsel distracted the Asuras and got the nectar back. One Asura suspected foul play, disguised himself as a Deva, and drank some Nectar. But before the Nectar could pass his throat, Vishnu cut off the head. The head, however, remained immortal. It is believed that this immortal head occasionally swallows the sun or the moon, causing eclipses. Then, the sun or moon passes through the opening at the neck, ending the eclipse.


Varaha - The Boar - Varaha is the third avatar of Vishnu, a boar sent to defeat Hiranyaksha, a horrible demon who had taken the Earth and carried it to the bottom of the ocean. The battle took a thousand years, but Varaha won. Varaha is depicted in art as either purely animal or as being anthropomorphic, having a boar's head on a man's body. In the latter form it has four arms, two of which hold the wheel and conch-shell and the other two hold a mace, sword or lotus or form a blessing posture. The earth is held between the boar's tusks.The avatar symbolizes the resurrection of the earth from a pralaya (deluge) and the establishment of a new kalpa (cycle), and can thus be considered to constitute a creation myth. The Varaha purana is a purana in which the form of narration is a recitation by Varaha.


Narasimha - The Man-lion - Vishu takes this form to deliver the world from a demon, who had obtained from Brahma the boon, that he should be slain neither by a god, a man, nor an animal. In his previous avatar, Vishnu was Varaha and killed the demon Hiranyaksha, whose brother, Hiranyakashipu, was greatly angered by this. Hiranyakashipu decided to gain magical powers by performing a penance for Brahma. Hiranyakashipu asked for a boon from Brahma that he would not die on Earth or in space, nor in fire or water, not during the day or night, not inside or outside, and not by the hand of a human, god, animal or any other animate or inanimate species. Brahma was pleased with his penance and granted the boon. Hiranyakashipu, hated the gods and most especially Vishnu, the followers of whom he began to torture. Hiranyakashipu's son, Prahlada, was a very devoted follower of Vishnu. Hiranyakashipu failed in convincing his son to join him against Vishnu, and tried to kill him, but Prahlada was protected by Vishnu. When asked, Prahlada refused to acknowledge his father as the supreme lord of the universe (though he had used his boon to conquer the entire world) and claimed that Vishnu was omnipresent. Hiranyakashipu asked if Vishnu was in a particular pillar and Prahlada answered he was. Hiranyakashipu smashed the pillar, and Narasimha came from it. Narasimha killed Hiranyakashipu, since he was neither human nor animal nor god (an avatar is a human, but this avatar was only part
human and part animal) and did so during twilight (neither day nor night), placing him on Narasimha's thighs (not on earth, nor in space), on the threshold of the entrance to a courtyard (neither inside nor out) and using nails (neither animate nor inanimate) as weapons.


Vamana - The Dwarf - Vamana is the Fifth Avatara of Vishnu, a dwarf brahmin. He is also known as Upendra. He defeats the Devas' (Gods') enemy Maha Bali Chakravarthi (of the demon race) into giving up all of the heavens and earth. King Bali, in an attempt to cement his place as the ruler of all Three Worlds (i.e. the Universe), performed a series of grand yajnas (prayers/sacrifice). The Gods feared that this would cause evil to stalk the Universe, so they prayed to Mahavishnu to assist them. On King Bali's last yajna, Vamana a small brahmana boy appeared. The King was delighted to be graced by the presence of such a holy being, and offered Vamana anything that he wished for. Vamana asked for a piece of land only three paces wide and Bali laughs at the proposal, highlighting the great wealth and land that he owns. However he nonetheless agrees to this wish, against Asuraguru Sukracharya's warning that Vamana is in fact the avatar of Mahavishnu who has come once again to defeat the demon race. King Bali agrees, but this invokes the anger of his spiritual master, Sukracharya, who curses him. King Bali presents Vamana his gift, whereupon Vamana grows in size and steps across the earth in one step, the heavens in the second step. Having now
conquered all of Bali's wealth, Vamana asks him where he should place his third step. King Bali, in trying to fulfill his promise, offered his head as the third place. Thus Vamana places his third step on King Bali's head, defeating him completely. Vamana taught King Bali that arrogance and pride should be abandoned if any advancement in life is to be made, and that wealth should never be taken for granted since it can so easily be taken away. Vamana then took on the form of Mahavishnu. He was pleased by King Bali's determination and ability to keep his promise in the face of his spiritual master's curse and the prospect of losing all his wealth. Vishnu named the King Mahabali since he was a Mahatma (great soul). He allowed Mahabali to return to the spiritual sky to associate with Prahalada (the demoniac Hiranyashipu's pious son, also a descendant of the demon race) and other divine beings. Mahavishnu also declared that Mahabali would be able to rule the universe in the following yuga (age).

Bali is supposed to return every year to the land of his people, to ensure that they are prosperous. This is celebrated as the Onam festival in Kerala, where he is also called Maveli.


Parasurama - Rama with the Axe - Parashurama is the sixth avatar of Vishnu and a son of Jamadagni. He received an axe after doing penance for
Shiva. He is a Chiranjeevin (immortal). King Kaartaveerya-arjuna and his army visited Jamadagni, who fed his guest and the whole army with milk from his divine cow; the king demanded the cow and Jamadagni refused because he needed the cow for his religious ceremonies. King Kaartaveerya-arjuna sent his soldiers to take he cow and Parashurama killed the entire army and the king with his axe. In return, the princes beheaded Jamadagni. In revenge, Parasurama killed the entire clan of Kaartaveerya-arjuna, thus conquering the entire earth, which he gave to Kasyapa. According to one legend, the story goes on that Parashurama was struck by remorse at his wanton killings, and offered penance on a mountain top. The sea god Varuna responded, and offered him land equal to the distance he could throw his axe. Parasurama threw his axe from Gokarnam and it fell at Kanyakumari. As promised the sea gave way to land, thus giving rise to Kerala. Parashurama also went to visit Shiva once but the way was blocked by Ganesha. Parashurama threw the axe at him and Ganesha, knowing it had been given to him by Shiva, allowed it cut off one of his tusks.


Lord Rama - The great king of the Hindu epic, Ramayana. Lord Rama was a real or mythical king in ancient India, whose life and heroic deeds are related by the Sanskrit epic Ramayana. He is the Prince of Ayodhya and is banished to a forest by his stepmother. While in exile, his wife, Sita, is kidnapped by Ravana, King of the Rakshas on Lanka (present Sri Lanka). Rama, along with Hanuman, rescued her, killed Ravana and becomes King of Ayodhya. Rama also killed Bali, the monkey-King of Kishkindhya. He is protected during his adventures by Agastya, and also rescued Ahalya after she was turned to stone by her husband for having an affair with Indra. Lord Rama is held up as a model of Hindu devotion, equality and the rules of dharma.


Lord Krishna - He is the most perfect avatar of Vishnu. Lord Krishna (meaning black as well as all-attractive one) is the most worshipped Hindu god. Previously, the demigods and demons had been at war in the heavens. When the demons were defeated by the demigods, they decided to instead attack the planet earth. Thus, they invaded the earth by discretely taking birth as princes in powerful royal families of the time. And as the earth became overrun by militaristic activities of these kingly demons, the demigods including the Earth goddess earnestly sought Lord Visnu's protection. Seeing the deteriorating social and political conditions and hearing the prayers of the demigods, the all compassionate Supreme Lord Sri Krishna decided to descend for the benefit of all.


Gautama Buddha - According to popular Hindu beliefs, in the age of Kali Yuga (The Age of Darkness and Destruction) the general populace become more ignorant in regards to spiritual values and religious life. There is a belief that at the time of Buddha's arrival many of the Brahmins in India were abusing the Vedic system for their own selfish purposes, and were especially involved in needless animal sacrifices, and that as a result Buddha appeared as an avatar to readdress the balance.