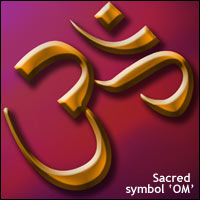 AUM or OM in one word is the symbol and summarises the total essence of Hinduism or Sanatana dharma. The symbol Aum (also called Pranava), is the most sacred symbol in Hinduism. The meaning of OM is the oneness with the supreme and the merging of physical form with the spiritual. From OM is the first sound of the supreme almighty from which emerges every other sound used in music or language.

According to Hindu philosophy this syllable is combined of three components: the letter A, which represents creation, when all existence issued forth from Brahma's golden nucleus; the letter U, which refers to Vishnu the god of the middle who preserves this world by balancing Brahma on a lotus above himself. The letter U with the A, produces the sound of the long Ō. The M produces the prolonged resonance of the nasal cavity with the mouth closed: it is the final part of the cycle of existence, when Vishnu falls asleep and Brahma has to breathe in so that all existing things have to disintegrate and are reduced to their essence to him. This is the M of Maheshwara, also known as the great Lord Shiva, whose long period of yoga begins so that the sensual world ceases to exists. Shiva's drum produced this sound and through it came the notes of the octave in Indian music i.e SA, RI, GA, MA, PA, DHA, NI. Thus by this sound Shiva creates and recreates the universe. OM is also the sound form of the soul.

The Upanishads state that everything, existent and non- existent, can be grasped by uttering the sacred syllable of OM. The psychotherapeutic efficacy of OM is deemed limitless and its utterance redeems all errors in the performance of a sacrifice. Meditation on OM satisfies every need and ultimately leads to liberation. Nearly all the prayers and recitals of sacred passages are prefixed by the utterance of OM. Its equivalent is OMKAR, venerated in the same manner and is thought to be the representation of God Himself.